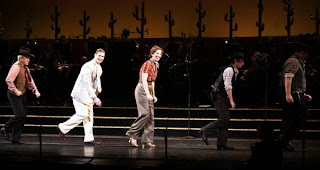 In the depths of the Great Depression, the brothers Gershwin decided the American people needed a little pick-me-up. Instead, they hit a grand slam. The tale of a sophisticated New Yorker marooned in a dusty Western cow-town with no one who understands him but the Yiddish-speaking cabbie who brought him there and no one to love but the only woman within 50 miles, the show gave birth to one of the all-time flashiest Broadway scores, featuring “I Got Rhythm,” “Embraceable You”, “But Not For Me” and “Boy! What Love Has Done To Me” among others. The original production put a hot jazz band in the pit, led by cornet virtuoso Red Nichols, and including such jazz greats as Glenn Miller, Gene Krupa, Tommy Dorsey, Benny Goodman and Jack Teagarden. The resulting sound is a unique treat for theatergoers today, as each musician left a lasting impact on the show’s arrangements and orchestrations.
Labels: Encores