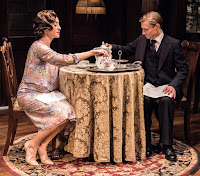 "Ms. Thompson’s cast is so strong.
Mr. Beck, who plays the socialist, has the best part and runs with it,
never succumbing to the temptation to sound too good to be true..."

- Alexis Soloski, The New York Times
***
"To my mind, any production with Jeremy Beck is fortunate.
Tom’s emotional and physical debilitation as well as the character’s fury with powerlessness is visceral; changes in energy and renewed balance irrefutable. Principles seem deeply felt.
The actor inhabits wariness/reticence/confusion with watchful subtlety.
A splendid performance."

- Alix Cohen, Woman Around Town
***
"Clarke and Beck make a fine central pair of battlers, although Beck comes off better
no doubt because he’s the freethinking hero."

- Steven Suskin, NY Stage Review
***
"...very fine actor, Jeremy Beck (Mint’s Hindle Wakes).
His creation of the struggling and trapped Smith is beautifully thoughtful and dynamic, pleading the case of the less fortunate with a strong sense
of internal self-knowledge and societal distress.
His dramatic rise as the play moves exquisitely forward becomes the soil and soul of the play, giving nutrients and a warm place to grow. Without this gifted actor portraying this intelligent and thoughtful dreamer, the play might be lopsided with no internal struggle or progressive outlook, but with him at the root of the debate,
Conflict literally grows strong and true."

- Times Square Chronicles
***
"A meeting between two soon-to-be rivals, Ronald Clive (Henry Clarke) and Tom Smith (Jeremy Beck), as directed by Jenn Thompson, is a masterpiece of tension and exposition."

Ken Marks, The New Yorker
***
"Jeremy Beck delivers a solidly engaging performance as the rogue Tom Smith turned political activist. Mr. Beck is delightful as he “seduces” Dare with knowledge and the realm of meta-politics.

- Elyse Sommer, Curtain Up
***
"the earnest Tom Smith is
played with fiery passion by Jeremy Beck"

Beatrice Williams-Rude, Theatre Pizzazz
***
"Smith’s defense of Labour’s principles, expressively delivered by Beck,
has a timely ring:  “It seems to me pretty clear that, in these days of science and machinery, if we really wanted, as a first step to a more sensible world, to produce enough clothes and food and warmth for everybody, we could; the only thing that’s lacking is a common purpose,  deeply enough felt among enough people, that the thing’s got to be done.”
Beck, Shelton, and Clarke are first-rate as the vertices
of Malleson’s tense romantic triangle."

- Charles Wright, Off Off Online
***
"What follows is a lengthy piece of exposition detailing Tom's slide into penury... In other hands, the speech might have seemed onerous, a thick slab of exposition, but it is delivered superbly by Jeremy Beck, whose solid grasp of period style has made him a mainstay of The Actors Company Theater and, more recently, the Mint. Beck paces his tale expertly, impulsively pouring out the ruinous details, yet, occasionally, coming to an abrupt halt, pausing to consider how much more of his humiliation he must share. Hunched over a coffee table, devouring a plate of sandwiches and gulping glass after glass of whiskey, he infuses the scene with an animal desperation that leaves his auditors -- Clive and Lord Bellingdon, Dare's father -- in a state of speechlessness."

- David Barbour, Lighting and Sound America
***
"...the performance of Jeremy Beck stands out. Beck is sensational as Tom Smith, a man whose view of the world changes radically when he falls from the upper classes to near starvation.  Beck portrays Smith as a careful man who suppresses his emotions, yet the audience always knows what emotions he is suppressing. Smith's pride, humiliations, ambitions, and love are all the more vivid for being so carefully tamped down.
It is a performance of quiet brilliance."

- Wendy Caster, Show Showdown
***
"In Jeremy Beck, Henry Clarke, Jessie Shelton, and Graeme Malcolm (all of whom have been seasoned in the regional and not-for-profit theatres in the USA and Britain)
we have perfection..."

- Richard Seff. On and Off Broadway
***
"Tom Smith first appears as a penurious interloper on Lord Bellingdon's estate,
and his character's growth in integrity and confidence is as well portrayed by Jeremy Beck as his physical transformation is astonishing, the latter with great help from costume designer Martha Hally and whoever is responsible for Beck's makeup."