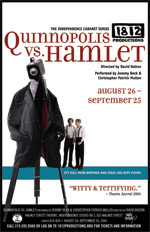 Shakespeare and theatre scholars across the country respond to Quinnopolis, NY's production of "Quinnopolis vs. Hamlet":

More than one reviewer (including this cluster's editor, Alice Dailey) has rightly singled out the scene of "Ophelia's drowning" as one of the most curiously moving moments of Quinnopolis vs. Hamlet (Dailey 2005). Quinnopolis, perhaps making a virtue of necessity, created a raw experience that managed to wring pathos out of little more than Ophelia's wet dress. Well, there was a little more — the actors plaintively sang "My Darling Clementine." I must confess that I can't get over the brilliance of placing this song here. The sardonic lyrics about a woman drowning ("alas, I was no swimmer / Neither was my Clementine") and her associated flowers ("There grow rosies and some posies / Fertilized by Clementine") so unnervingly fit with this production's macabre humor; it is a terrific credit to the intelligence of the company that they discovered this thematic conjunction. Even more provocatively, the song hearkens back to the John Ford movie My Darling Clementine (1946), which itself includes a speech from Hamlet and revises that play, obliquely yet persistently (see Simmon 1996). (Exerpt)


Hamlet vs. Quinnopolis vs. Hamlet
by Peter Kanelos

Quinnopolis vs. Hamlet is concerned not with the desire for individuation, which is what we have by habit and tradition taken Hamlet to express, but is rather about the overwhelming agony of finding ourselves alone. A and B emerge from their box with a sort of Edenic innocence, and there is something pre-lapsarian about the buffoons' garbled language and exuberant curiosity. In fending off Hamlet, they are attempting to keep contained a terrifying sort of knowledge, but the seal has been broken, and death seeps onto the stage. (Exerpt)


Francisco and Bernardo do Hamlet
by Helen Ostovich

McMaster University
Borrowers and Lenders - The Journal of Shakespeare and Appropriation

In trying to make a bridge from the hamlet/Hamlets of Quinnopolis to Shakespeare's Hamlet, the clowns bring to the play a profound sense of the overwhelming, the grief of loss, especially unnecessary loss — of father, mother, lover, friends, mental agility or clarity, political future — all the things that make Hamlet, Hamlet, and that actors hope to convey to an audience when they makeHamlet be (or not be) a Hamlet that moves us.  (Exerpt)

Quinnopolis vs. Hamlet:  Pickers and Stealers
by Paul Menzer

The toll of the actors' toil was evident in their sweat and fatigue, as they took possession of and were possessed by both play and prince. Near the play's end, Yeatts physically restrained Beck's Hamlet, stopping his mouth with duct tape, which, had Beck been a less compelling performer, might have invited ungenerous comment from an audience of conference attendees. Instead, it rendered with lucid economy the repulsion/attraction dynamic at the core of the play. As much as Shakespeare's words entrance us, we might agree with Jonson that "sometimes it was necessary he should be stopped" (Jonson 1947, 584). Quinnopolis agreed. Ultimately, Shakespeare was stuffed back in the box from whence the players initially appeared, silenced for the moment.  (Exerpt)

Quinnopolis vs. Hamlet at the Shakespeare Association of America Annual Meeting: An Introduction
by Alice Dailey

Villanova University
Borrowers and Lenders - The Journal of Shakespeare and Appropriation

Despite being transplanted from its ambient-rich Manhattan performance spaces to the sterility of a Loews ballroom, the two-man production, titled Quinnopolis vs. Hamlet, impressed SAA members with a meditation on Shakespeare's play that is both keenly intellectual and deeply moving, managing — against odds — to find new and interesting things to say about and with Hamlet. The following group of essays by Shakespeare Association of America members Regina Buccola, Peter Kanelos, Paul Menzer, Scott Newstok, and Helen Ostovich respond to this performance.  (Exerpt)

Still Crazy, After All These Years:  Ophelia vs. Clementine
by Regina Buccola

Roosevelt University
Borrowers and Lenders - The Journal of Shakespeare and Appropriation

Going well beyond the Shakespearean original, Quinnopolis vs. Hamlet offers a whirlwind tour through at least a century and a half of literary criticism (running the gamut from the work of Freud's follower Ernest Jones to Stephen Greenblatt's early twenty-first century salvo, Hamlet in Purgatory, 2002) and reprises key moments from famous stage-into-film versions of the original play — or plays. In addition to insightful interpretation of the various relationship dynamics in the play and their subconscious roots, Quinnopolis vs. Hamlet also confronts head-on the presence of multiple texts of Hamlet. Rather than producing a four-hour Shakespeare-a-thon, as does Kenneth Branagh's attempt to reconcile the good quarto with the Folio text (1996), the movement in Quinnopolis is toward distillation, creating a 75-minute meditation on the play's various permutations, as well as on prior interpretations of the central characters: Hamlet, Ophelia, Gertrude, Claudius, Polonius, and the ghost. Here, the male characters are artists (Hamlet is a tripod-mounted camera, clad in the artist's uniform of black; Claudius's costume offers an opportunity for a puppet play-within-the-play; and Polonius is turned into a misogynistic director of his ingénue daughter) while the female characters are tools. Gertrude is literally a prop in this production; her main function is to point out, punctuate, and report on the collateral damage suffered by Ophelia as Hamlet falls headlong into vengeful madness. Seldom has the Tragedy of Ophelia been clearer, or more poignant. (Exerpt)

Click here for the full Borrowers and Lenders Review Cluster

Witty and terrifying...Their work is thorough, disciplined, and intense.