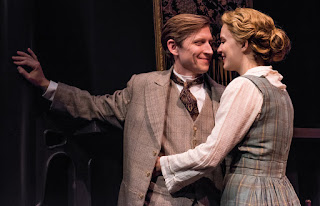 It’s “Wakes Week” in Hindle; the mill is closed and the workers are idle. Fanny Hawthorn is relaxing at the seashore with a girlfriend when she runs into Alan Jeffcote, the mill owner’s son. Alan takes Fanny to an hotel in Wales for a few days of fun, but the fun stops when their parents find out.
When Hindle Wakes premiered in London in 1912, many critics called it the best play of the year. However, the play’s unsentimental depiction of two young people seeking pleasure without commitment sparked moral outrage, filling England’s newspapers with passionate argument over the play’s controversial subject matter. Of course, controversy was good for business and Hindle Wakes was a hit.

Not seen in the U.S. in nearly a century, Mint Theater Company’s revival of Hindle Wakes “reaffirm[ed] the play as both well worth knowing in itself and particularly resonant in today’s political climate,” (The Village Voice).1  The Wall Street Journal called Hindle Wakes “a study of provincial hypocrisy in Vicwardian England that crackles with a biting candor,” praising Gus Kaikkonen, “one of the deftest directors on the East Coast,” for his direction’s “crisp understatement… letting Houghton make his own stiletto-sharp points instead of ramming them home.”2 Remarking further on Houghton’s skillful storytelling, The New York Times noted that Hindle Wakes “proceeds… gentle as a summer rain until, bam … something electric happens to charge the air.”3